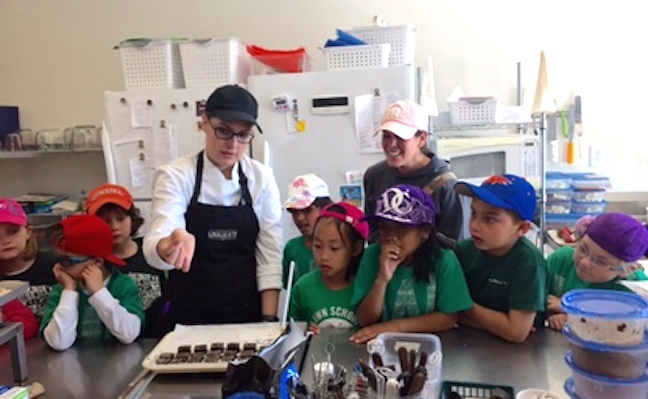 During their most recent integrated unit, our second grade students have delved into the world of chocolate and its evolution into one of the world’s most popular treats. Students have learned that the fruit of the cacao tree is a football-shaped pod that grows directly from the cocoa tree’s main branches and trunk, not from a stem like an apple.  They even learned that the average American eats about 12 pounds of chocolate each year! As part of their chocolate study, the second grade students had the exciting opportunity to visit the Davidson Chocolate Company.  Students were given a tour of the kitchen and learned the process for creating chocolate from the cocoa bean.  Students then had the opportunity to create their own chocolate treats, including chocolate covered strawberries with sprinkles and chocolate covered pretzels.
To close out this sweet unit, the second grade surveyed different classes about their chocolate preferences and attended a chocolate tasting hosted by the second grade class. Students tried a variety of treats dipped in white, dark, and milk chocolate including crackers, potato chips, marshmallows, and rice krispy treats.  Several students felt that salty chips dipped in chocolate were especially delicious!