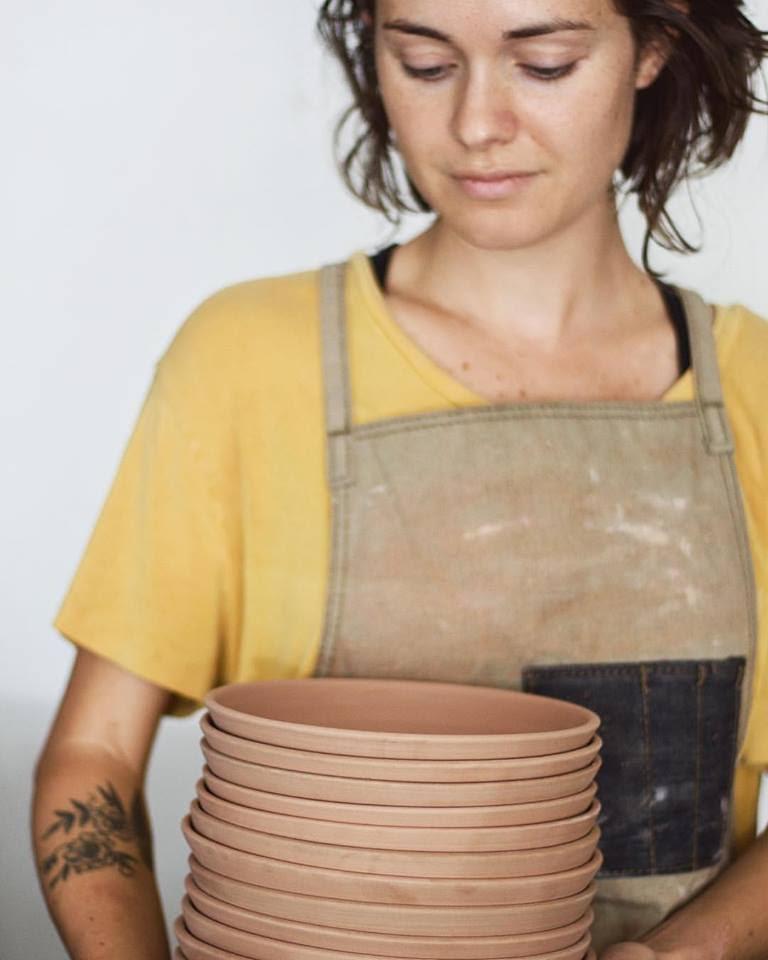 Mallorie Ables Terranova 11’ recently hosted the grand opening of her pottery studio and showroom under her new business, Jars of Dust, in Virginia Beach, VA. After a few years of running the studio out of her garage, Jars of Dust is officially a storefront in a hip new artsy center of Virginia Beach called The Vibe. Jars of Dust is a handcrafted line of functional ceramics that grew from Mallorie’s love of art. After starting working with clay on Woodlawn’s campus in middle school, Mallorie now has her own business that produces pieces made from stoneware clay and that are intended to be used on a daily basis in your home, out of the cupboard, and on the table. Each artistic piece is inspired by and crafted for the hands that will hold them. Their color palettes are influenced by the natural aesthetics of clean and minimal earth tones.

Following her graduation from Woodlawn in 2011, Mallorie did not have any definitive career plans in mind, let alone a specific course of study in college. “If you told me back then that I was going to open a store, I don’t think I’d believe you,” she says. “Each day I wake up and say, ‘is this actually happening?!’” The idea of becoming an entrepreneur did not surface immediately. She matched her interests with her education and earned a bachelor’s degree in studio art with a concentration in photography and ceramics from UNCW. Rather than filling out job applications like many of her classmates, Mallorie invested in a potter’s wheel, kiln, and one thousand pounds of clay, eager to build the foundation for her future business. “The thing I learned from this was to really play to my strengths,” she says. “Once I pulled that trigger and decided to play to my strengths, that is when I felt joy.” 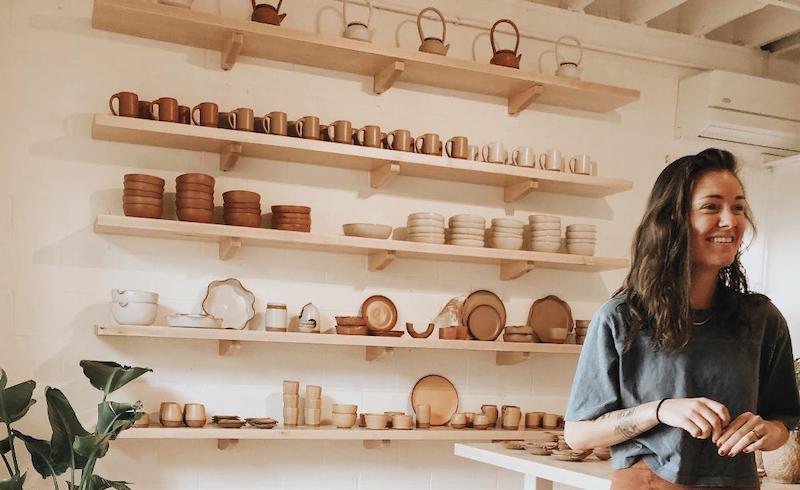 Starting a pottery business from the ground up presented Mallorie with a unique set of challenges. When asked about obstacles she has faced from her transition as a college student to business owner, she listed the need for initial revenue, hiring and leading staff and developing marketing plans and navigating sales goals. She shared that being a female business owner in a sea of male business owners, not taking home a steady income, wearing multiple hats, and working around the clock have all helped to develop her work ethic. Mallorie says the parts that are most challenging about owning a business can also be the things that are the best and most rewarding. “I think the idea of being open to learning new things in general is the most important skill. You have to be okay with wearing all the hats - being the accountant, the salesperson, the graphic designer, the photographer, the website designer, packing and shipping — in addition to being the maker and the artist. If all I ever wanted to do was make pottery and was not willing to take on other responsibilities, my company wouldn’t exist.”

While building and running a business from the group up may be daunting, luckily Mallorie is not tackling it alone. Her husband, PJ Terranova, plays just as crucial of a role in Jars of Dust as she does. PJ is not a potter, but he works with his hands and has a mind for design and craft. He is one of the head carpenters at Benevolent Design Co. and built every piece of wood furniture in Jars of Dust’s new shop space, from the shelves, the table, to the checkout counter, with exquisite attention to detail. “The way we have combined PJ’s wood furniture with my clay pottery is a union that we are both extremely proud of and had so much fun creating together. Sometimes our customers will come into the store and ask if the tables are for sale!” 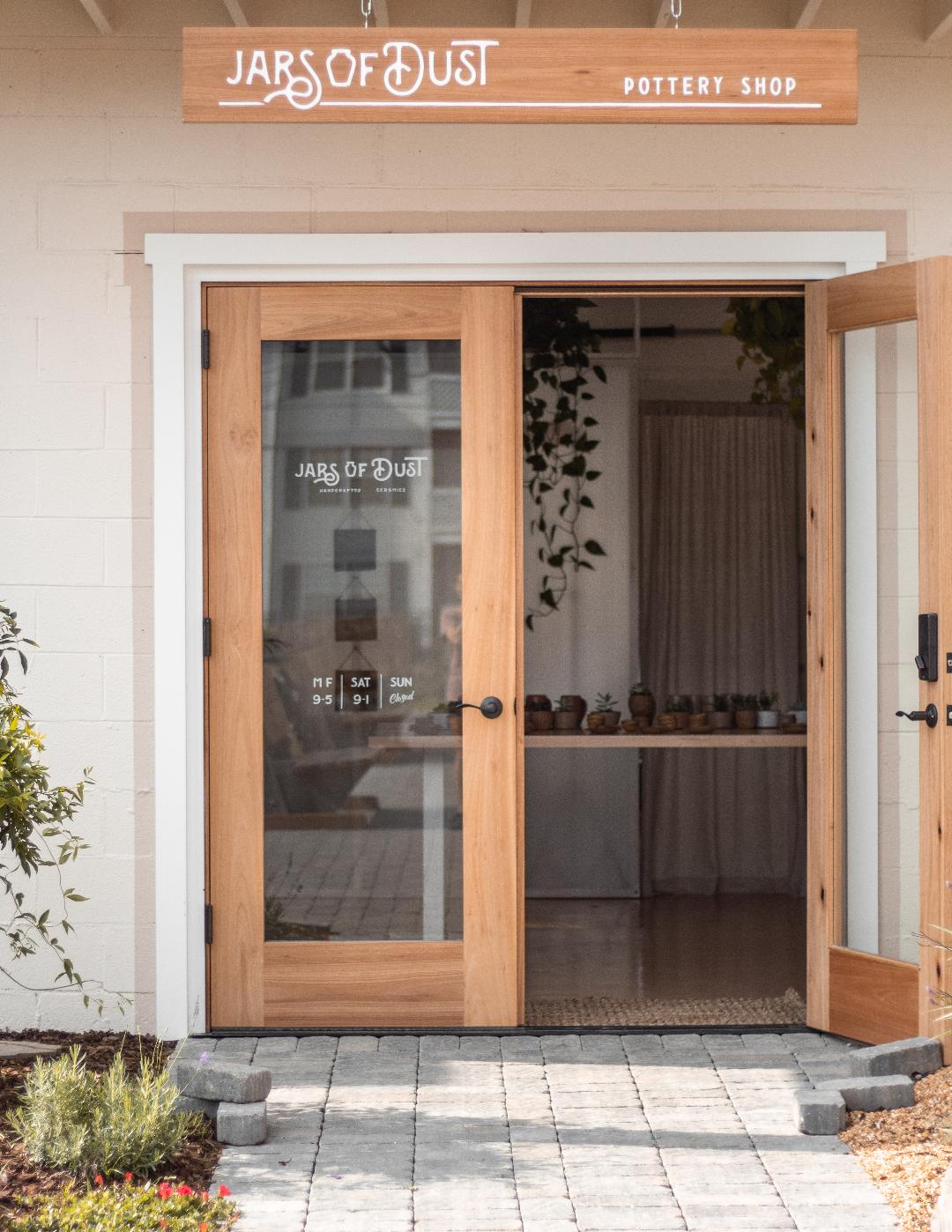 Mallorie’s storefront is open most days (closed on Sundays). If you’re ever in Virginia Beach, she hopes you’ll stop by to see her and her chocolate lab, Brown. She also takes custom orders as well as online orders from her stock inventory. But be warned: just about as soon as she announces a new batch of pottery is available, it suddenly isn’t! She sells out quickly! You can check it all out here at jarsofdust.com or follow her on instagram @jars.of.dust