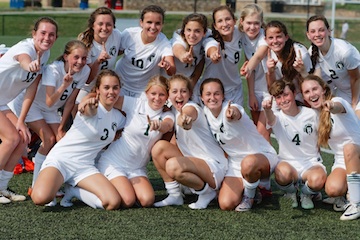 DAVIDSON, NC – In its inaugural season competing in the 1A SPAA Conference, the Woodlawn School Trailblazers earned the conference championship in girls soccer, capping off the season with a 3-0 win over reigning state champion Hickory Christian on Wednesday afternoon. With the win, the Blazers improved to 10-3-1 on the season and take a 9-game winning streak into the North Carolina 1A tournament, which begins this week.

“Yesterday was a great day for the team, but it was especially so for the seniors,” said Woodlawn’s coach, Tim Helfrich. “We have 7 seniors on this team, all of whom have played since their freshman years. They have set the tone for us all season long: we work hard, have a lot of fun, and maintain a goal of getting better every day. They have remained true to each of those goals, and I am confident we will work even harder, have more fun, and continue to get better as we head into the state tournament.”

Eighth grader Connors Anderson (Davidson) got the scoring started early when she knocked home her first goal of the season after a shot from Rebecca Coutinho (Cornelius) rattled off of the post. A brilliant left-footed effort from Clare Robinson (Davidson) made the score 2-0 before halftime. The goal was Robinson’s fourteenth on the season, a tally that earned her recognition as the SPAA Conference MVP.

It was all Woodlawn in the second frame as well, with the team gaining an insurance goal as Lexi Navarro (Cornelius) beat the Hickory keeper following a defensive miscue. Lexi’s goal was her third in tournament play to go along with two assists. Navarro was named the SPAA Conference Tournament MVP following the game.

Seeding for the state tournament will take place this Wednesday in Raleigh. Woodlawn has an automatic bid into the tournament but awaits the news of its next opponent. The state finals will be played in Raleigh on May 15 and 16.