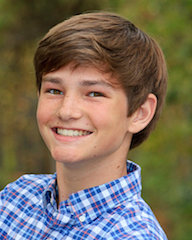 DAVIDSON, NC – Nick Marcello '17 of Davidson has become the first-ever Woodlawn qualifier in the NCISAA 1A State Golf Championship, to be held on May 11-12 in Pinehurst, NC. Nick will compete in the two-day, 36 hole tournament at Mid Pines Golf Course. To qualify for this event Nick had to compete in at least four sanctioned golf matches at United States Golf Association (USGA) approved golf courses. Additionally, throughout the season Nick had to keep his USGA index score (formula: score - course rating x 113/slope) less than five. Nick was well under with an index score of 4.1 and was selected as one of the top nine 1A individual golfers in the state.

Nick emerged as the leader of this year's young varsity golf squad, which was composed of 3 sophomores and 2 freshmen, and coached by Nick's father, Vin Marcello.