Berini Honored as NCISAA 1A Cross Country Athlete of the Year 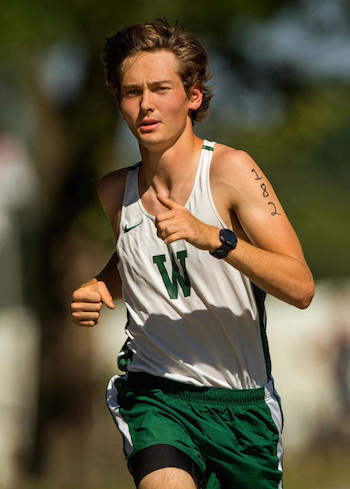 DAVIDSON, N.C. – Senior Tripp Berini has had quite a ride during his four years as a Woodlawn varsity cross country runner. As a freshman, he set a personal best 5K time of 19:42, and placed 14th at the state championship meet (fourth for Woodlawn) as the Trailblazers upset heavily-favored Shannon Forest for their first NCISAA 1A title. In his sophomore season, he lowered his personal record to 18:23, and moved up to place 5th at the state meet (running in the third spot for Woodlawn), helping his team dominate the field for their second straight state championship. Tripp was nagged by injuries in his junior season, but he again came through at the state meet, placing 12th (third for Woodlawn) which allowed the Trailblazers to squeak by Halifax in a tie-breaker for their third title.

In 2017, due to the graduation of Quinn Schneider and Zach Lorch, Tripp knew that the front-running responsibilities would be falling on his shoulders. He set very high goals for himself, and then ramped up his summer training to prepare for his final year of Woodlawn cross country. Unfortunately, disaster struck in late July as he suffered a severe leg injury - as a result, he was forced to abandon running for 6 weeks and miss the first half of the season. Most runners might have assumed that their season was destroyed, but Tripp was not going to be defeated so easily. He spent many hours in the swimming pool, trying to maintain his fitness level, and carefully started running again in mid-September. By October 5th, he was still running gingerly, but competed in his first meet and ran a very respectable 19:00. Two weeks later, Tripp's hard work and careful rehabilitation paid off as he placed first in the SPAA Championship Meet with a new personal best of 18:17, leading his team to their fourth straight SPAA title. The following week at the NCISAA 1A state meet, he ran a nearly-identical time and demolished the field to take home the individual title - the third straight year that a Woodlawn runner claimed that prize.

“This has been an unforgettable season with so many unexpected turns,” said Tripp. “I really am so grateful for all the people that helped me during this season and my cross country career to achieve my goals. I'm really going to miss running here and being on this team next year, but I’m happy that I’ve contributed to the success of this team and I hope to see more success from them in the years to come!”

Tripp's success as an athlete is mirrored in the classroom - he has already been accepted at several universities and has multiple merit scholarship offers to consider as a he makes his college choice. His comeback story also caught the attention of the state running community, and he was recognized as the NCISAA 1A Cross Country Athlete of the Year, an award voted on by all NCISAA coaches. Tripp's cross country legacy at Woodlawn includes two all-state honors and three all-conference selections. His personal record of 17:58 (set at the Footlocker South Regional on Nov. 25, 2017) places him at #5 on the all-time Woodlawn 5K list.

Coach Dwayne Bowman has watched Tripp grow as a student-athlete over the past four years and noted that Tripp really rose to the occasion in his senior season when the team needed him the most. Coach Bowman stated, “Tripp is quick to credit the influence of his current and former teammates - he saw the incredible work ethic of runners like Quinn Schneider up close, and that was an inspiration for him as he faced a grueling road back to competitive racing after his summer injury. Now he has set an example for future Woodlawn runners.”