Fun at the Woodlawn Day Fair

Fun at the Woodlawn Day Fair 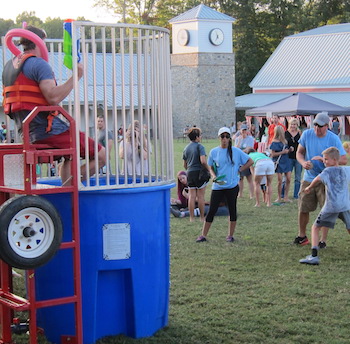 Trailblazers, Woodlawn families, and teachers filled the quad for our very first Woodlawn Day Fair on September 15, 2017 organized by Woodlawn’s Parent Connection (PX). Whether they were square dancing, sack racing, having their faces painted, or playing one of the many carnival games, the Woodlawn community was boasting with smiles and laughter!

The traditional fair games were the most popular amongst the little ones, such as the Can Toss Knockdown, the Go-fish Cup game, and Quoits-Ring Toss. The children had a chance to play a fun, yet educational version of the Duck Pond game. Depending on their age, they were challenged to identify, add, or multiply the numbers on the bottom of the ducks that they picked up.

Middle schoolers were thoroughly entertained with the larger rides and games, such as Soccer Darts, the Vertical Rush Obstacle course, and especially the Mechanical Bull Ride! The Faculty Dunk tank was a hit with ALL of the Woodlawn students: they had so much fun dunking their teachers!

Featured at the fair were also the historic Stinson tours given by founding teacher, Ms. Debbie Lolla and the apple tasting lead by Woodlawn’s garden guru, Ms. Cathy Denham. Thanks to the parent, teacher and student volunteers and to all those who attended, this event was a huge success!