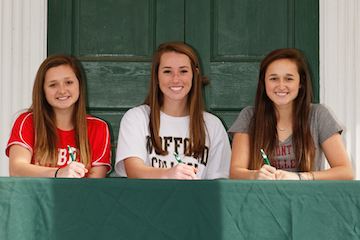 DAVIDSON, N.C. – On National Signing Day (Wednesday, February 4), Woodlawn School celebrated three students who have signed to play NCAA-level Women’s Soccer, starting in the fall of 2015. Clare Robinson, of Davidson, will play at Wofford College (Division I); and Rachel and Rebecca Coutinho, of Cornelius, will play at Belmont Abbey College (Division II). All three have been playing soccer since the age of four.

Robinson recently finished her ninth season with Charlotte Soccer Academy, under the direction of Phil Hufstader. She has competed on nationally ranked club teams, making national tournament appearances in 2013 and 2014. Primarily a defensive player, Robinson is looking forward to the challenge of a midfield position as she makes the transition under Wofford Coach Amy Kiah. She is Woodlawn’s second female signed by a Division I school (click here for a full list of Woodlawn’s NCAA athletes).

Rachel and Rebecca Coutinho have played together at Carolina Rapids, formerly North Mecklenburg Soccer Club, in the center back positions. The Coutinhos were pivotal players on a three-time NCYSA State Champion team (2012, 2013 and 2014) that also won the 2014 Capital Area Soccer League (CSAL) Showcase and was a finalist at the 2015 Disney Showcase. The twin sisters are looking forward to joining their older sister Cassidy, a senior soccer player at Belmont Abbey College, under the direction of Head Coach Mike Lynch and Assistant Coach Jaime Malilong.

Robinson and the Coutinhos have been integral parts of the Varsity Women’s Soccer team at Woodlawn School for the past five years under Coach Tim Helfrich. Coach Helfrich is looking forward to one final season with all three players as they make their first appearance in the Southern Piedmont Athletic Association (SPAA) Conference, with an eye toward the NCISAA 1A State Tournament.