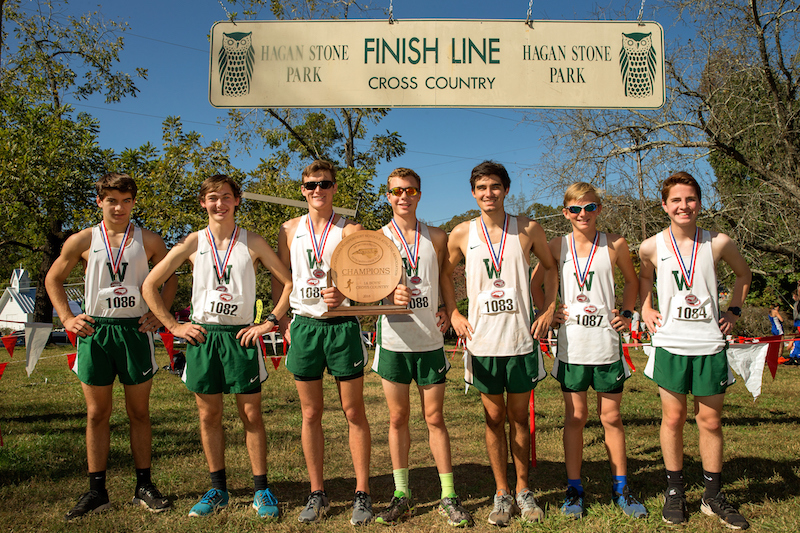 DAVIDSON, N.C. – The Woodlawn varsity boys cross country team continued its amazing streak, as they captured the NCISAA 1A State Championship at Hagan Stone Park near Greensboro on a beautiful autumn morning. The team raced in its first state championship in 2014 at Jackson Park in Hendersonville, where they stunned the field with a 1-point victory over the favored Shannon Forest runners. They followed that up with a dominant performance in 2015 at McAlpine Park in Charlotte, snagging three of the top five places to easily retain the title. The 2016 race, however, proved to be their toughest challenge yet, as the team scoring resulted in an unusual first place tie between Woodlawn and Halifax Academy - and the Trailblazers' team depth proved to be the deciding factor as they won the title on a tie-breaker.

The race started out well for the Woodlawn runners, with senior captain and defending individual state champ Quinn Schneider charging to the front. Quinn would lead wire-to-wire and finish well ahead of the field with an outstanding time of 16:12 to successfully defend his title. Based on his back-to-back state wins and his performances over the past 3 years (including a PR of 15:40 this season), the NC running media made the case that Quinn is now the GOAT (greatest of all time) in the NCISAA 1A division.

Senior Zach Lorch has been the #2 runner for the Trailblazers for the past 3 years, and he can always be counted on to come through with a big race when the team needs him the most. Today was no exception, as Zach raced to a personal record of 17:58 and surged at the end to hold off a Wayne Country Day runner for 3rd place. At that point, another Woodlawn state title appeared to be a foregone conclusion, but surprising finishes by two Halifax runners in 6th and 8th place combined with the 2nd place finish of their best runner gave them a total of 16 points and a legitimate shot to upset the favored Trailblazers. Junior Tripp Berini, Woodlawn's #3 runner, had been battling injury for the past couple weeks (he had not been able to run last week's SPAA conference championship meet), but he came through with a gritty performance and finished 12th - giving Woodlawn a total of 16 points and forcing a tie.

In cross country, ties are fairly rare and the standard way of breaking them is to determine which team has the best non-scoring runner. In this case, it would come down to the #4 runners for both Woodlawn and Halifax to determine the state champion. Woodlawn's #4 runner, 8th grader Jackson McGeough came through with a personal record of 19:23, finishing just behind Tripp in 14th place and easily outscoring the #4 Halifax runner, who finished in 31st place. In fact, Woodlawn's #5 and #6 runners (senior Austen Castellano and freshman Ethan Mason) also finished in front of that Halifax runner. Sophomore JT Faccone wrapped up the finishes for Woodlawn as he narrowly missed a personal record of his own and crossed the line in 62nd place.

Both Quinn and Zach were awarded All-State honors for the third consecutive year. They were also named All-Conference, along with Jackson McGeough and Austen Castellano, as the Blazers dominated the SPAA Conference Championship to win their third straight SPAA title a week ago.