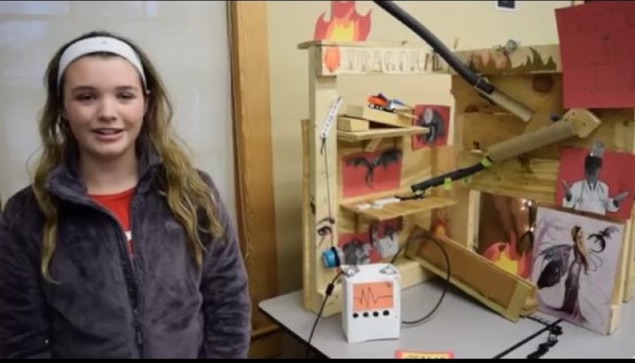 Rube Goldberg was a 20th century inventor and Pulitzer Prize-winning editorial cartoonist who is best known for his series of invention drawings. For more than half a century, Mr. Goldberg’s cartoons, which depicted elaborate, multi-step machines designed to perform simple tasks, such as swatting flies or sharpening a pencil, were featured in hundreds of newspapers throughout the United States. Little did Mr. Goldberg know, almost 100 years later, his whimsical designs would serve as inspiration for science teachers and students all over the world.

For their final project of a trimester spent studying the basic principles of physics, engineering and the engineering design process, Woodlawn science teacher Chris Van Amburgh tasked his eighth-grade students with designing and constructing their own Rube Goldberg-inspired machines.

Taking a cue from a unit on 19th century inventions the students were studying in history class, Mr. Van Amburgh provided them with a list of tasks, such as using a battery, changing a lightbulb, sending a Morse Code message, and zipping a zipper, from which to choose.

For weeks, the science lab was a massive construction zone, as students drilled, sawed, hammered, tinkered, tested and retested to bring the designs they had sketched on paper to life. In addition to physically constructing the machines, the students had to use their knowledge of the basic laws of physics and the skills they were learning in their math classes to calculate and create an intricate analysis of the energy it took for a machine to accomplish its task.

But the projects didn’t end there. Mr. Van Amburgh challenged his students to take their projects a step further. Now that the actual machines were complete, Mr. Van Amburgh wanted the students to present their machines to others, to communicate about the task a machine accomplishes or problem it solves, how the machine works and how the machine could be used in the real world, much like professional scientists and engineers may do when presenting their ideas to others, whether to secure funding for a project or buy-in and support from the organization with which they work.

So, Mr. Van Amburgh enlisted the help of art teacher Kim Lysne to work with the students to help them devise ways to make their projects more visually compelling. For example, the group of students who created “The Germinator”, a machine designed to dispense hand sanitizer, decided to present their project against the backdrop of a hospital setting to show how the machine could have real world application.

The students also had to use the skills they were learning in language arts to craft a summary of the 19th century invention that inspired their design and had to translate information about their machine into Spanish in order to communicate with a more diverse audience.

“When the students took on this project, I was impressed by the creativity they exuded and the collaboration they demonstrated when designing and creating these intricate machines,” said Mr. Van Amburgh. “This is a very challenging task and it really demands a lot of determination and perseverance on the part of the students.”