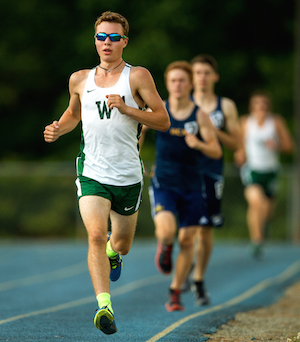 DAVIDSON, N.C. – The national Pre-Season Saucony Flo50 Cross Country Rankings were published in mid-August, listing the top 25 runners in each state, regardless of type of school or division. The North Carolina list was predictably dominated by runners from the large public schools that have well-known, established cross country programs. However, senior Quinn Schneider was recognized as one of the top 20 runners in the state, based on his performances in both cross country and track last year, despite running for a small 1A program in the independent school league.

Quinn made waves last year when he lowered his cross country 5K personal best to 16:15, third fastest on the all-time Woodlawn list. He also cruised to an easy individual victory in the NCISAA 1A state championship meet at McAlpine Park in Charlotte. The following spring in track season, his work ethic paid off with a couple of break-out performances in the distance events. Most notably, he crushed the competition in the 3200m final at the NCISAA 1A/2A state meet, winning the race with a blistering school record time of 9:31.53. A few weeks later, he lowered his 1600m personal best to 4:22.39, one of the best mile times in the Charlotte area that season.

Quinn hopes to lead the Woodlawn varsity cross country team to a third straight 1A state title this fall, as well as break the 16-minute barrier for 5K, something no Woodlawn runner has ever accomplished. He is also quite excited about training and racing on Woodlawn’s brand new 8-lane track.

Quinn and his teammates open their varsity cross country season at Southside Park in Newton on Aug. 29, where they will face teams from the SPAA conference. The Woodlawn boys team is heavily favored to win the SPAA conference (as well as the 1A state title) again this season, while the girls team will have to overcome the loss of two senior runners in order to repeat as conference and state champions.