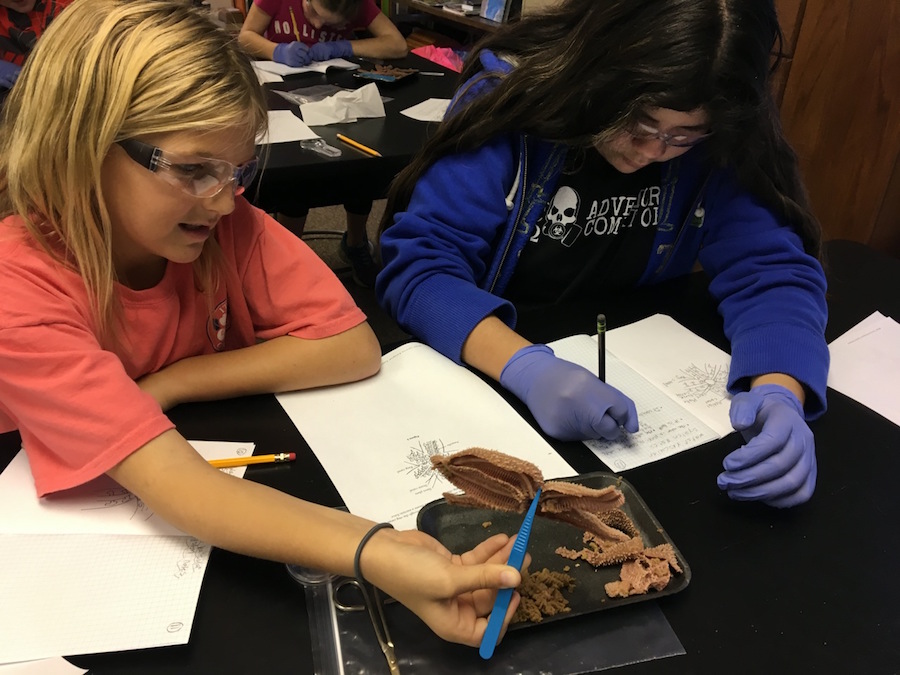 Dissection is always an exciting lab in science. This winter in 6th grade science Woodlawn students have examined a very interesting member of the Animal Kingdom, the sea star. Students examined this fascinating Echinoderm by conducting a dissection to learn more about its body structure and adaptations and why it is a member of the Phylum Echinodermata. Students practiced good laboratory procedures and worked with a lab partner, while examining the rays, the madroporite, digestive glands, stomach and water vascular system of the sea star. Students experienced first hand that the sea star as a "walking stomach" when they realized that every ray is filled with digestive glands and the stomach takes up the entire middle of the sea star. There is just no room for a central brain! Ava McGeough commented, “Sea stars are really complicated animals because I thought they were just walking stomachs but they have complete digestive systems.” While recording their observations like real scientists, students gained knowledge not only of the sea star, but also learned how close observation is an indispensable scientific tool. Many of the greatest scientific discoveries began with close observation of the natural world! The Sea Star dissection is part of the integrated study of the Renaissance in Europe. During this time period in Europe, scientists began to observe the natural world more closely, thus spurring the Scientific Revolution. With a smirk, Jake Modrak shook his head and said, “I will never look at a sea star the same way again. Cool experience though!”