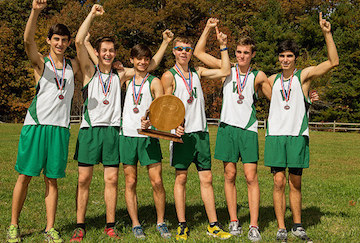 NCISAA State Championship Meet, Jackson Park, Hendersonville—This year’s state championship meet promised to be a barn-burner, as our Trailblazers entered the meet as slight favorites over perennial 1A contender Shannon Forest Christian (which has won 3 state titles over the past decade).  At the one-mile mark, it was a 5-man race, with Woodlawn sophomores Quinn Schneider and Zachery Lorch battling two Shannon Forest runners and Trinity Academy’s top runner.  Even though the Trinity Academy runner would surge over the last mile to take the individual win, Quinn hung tough for a crucial 2nd place finish ahead of both Shannon Forest runners.  Zach ran a fantastic race, clocking a personal record time of 18:04 and very nearly upsetting the second Shannon Forest runner.

Zach’s 5th place and another Trinity Academy runner’s 6th place meant that the team competition was effectively deadlocked 7 to 7 to 7 at that point in the race (Woodlawn’s 2nd and 5th place finishes versus Shannon Forest’s 3rd and 4th place finishes versus Trinity Academy’s 1st and 6th place finishes).  The third runner for each team would decide the state title.  Shannon Forest’s third runner, senior Luke Diemer, came out of nowhere to run the best race of his high school career – by 50 seconds – putting Woodlawn’s title hopes in grave jeopardy.  Fortunately, Woodlawn senior Reilly Milburn raced to the rescue with a season-best time of 19:35 to snag 10th place, edging out Diemer and ensuring the victory for Woodlawn – by a single point!  It doesn’t get much more dramatic than that!

Freshman Tripp Berini followed closely behind Reilly in 14th place, while sophomores John Bubak (with a personal record 20:43) and Austen Castellano placed in the top 30.

View photos from the meet